In a country with a population of around 24 million, the number of cars sold in a year is more than you can imagine. The total car registered as of 31 January 2019 is 19.5 million. The Australian car industry is much more interesting if you look into the details.

The latest data released by the Federal Chamber of Automotive Industries showed that total sales of new vehicles dropped by 10.1% to 85,633 units. This includes a downturn in each segment like passenger vehicle which fell by 16.7% and recorded just 25,783 units of sales. Light commercial vehicles posted a drop of 8.6% and decreased to 17,513 units, whereas SUVs plunged 5.4%.

The most surge in is in the light rigid vehicles which rose by 5.7% compared with the previous year. The campervans rose second-highest by 4.7%.
Though the sales figures have decreased in the current year, the average age for the vehicles increased to 10.2 years as of 31 January 2019.

If we look at the data from 2018, total vehicles registered were 19 million in 2018, less than the current year. This comprises passenger vehicles of 14,258,620 units which constituted 75% of the total cars registered. Freight vehicles comprised of 19.9% which recorded 3,788,395 units of vehicles. 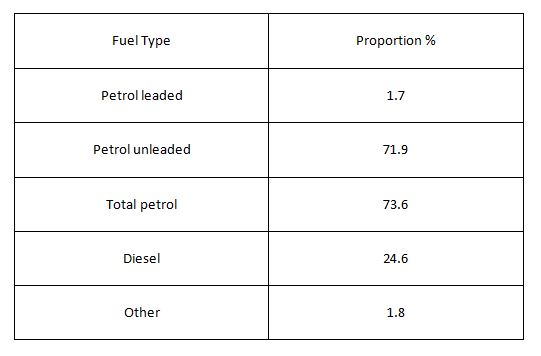 Petrol-powered vehicles fell 1.0% to 73.6% of the national fleet whereas the diesel vehicles climbed by 1.2% of the registered vehicles.
The brand which had the highest sales figures in the country was Toyota Hi-Lux, though it decreased compared with the previous year it still managed to remain in the number one position this year too. This was followed by the Ford Ranger which also fell by 9.5% than the preceding year and came at second ranking.

Read More: Why Should You Think To Trade Your Car?

The table below explains the sales of units in August by brand names and their change when compared to the previous year.

The change in the sales of cars gets affected by the change in the buying habits of the people. The Toyota Hi-lux sale for 2019 so far is 12,909 compared with 1Q18 which recorded sales of 12,634. Ford Ranger, this came second, posted sales of 9,662 vehicles during the period.

In January 2019, total vehicle sales recorded 81,994 units which decreased compared with the same period of the preceding year. Though, sales of SUVs jumped as the segment constitutes 43.8% of the total market sales.

Statistics For Sales By State:

New vehicle sales have been decreasing for the past 15 months compared with previous months. The above table shows the sales and change in each of the states.

Must Read: How  To Decode Your VIN

Sales of electric vehicles jumped in 2018 but decreased when compared with other countries. According to the Federal Chamber of Automotive Industries (FCAI), only 1352 vehicles were registered in 2018. Moreover, the total electric vehicles sold since 2011 is just 6000 excluding Tesla.

Australia can capitalize on the global electric vehicle transformation which will ultimately benefit the economy and environment.

The car sales have been in the downtrend in recent years in Australia but with the population yet there is hope in the future that the sales can be increased. Young aged people find cars to be the probable option to have in today’s world.